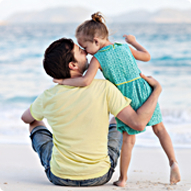 We married in 1994 with the desire to enlarge very soon with the family, because in our idea of the family composition there should be children. When the children were not yet forthcoming, adoption seemed a possibility before the biological children arrived.

We discovered the world of adoption attending workshops and seminars and talking to other adoptive families. The emotions of adoptive parents are various: anxiety, frustration, impatience, euphoria, discouragement. And there’s always that longed-for moment: the meeting with the baby.

Our first meeting with our baby Renato “Atoy” was an indescribable enchantment. He only exists and happiness and the joy are with us. At last we are a family.

We met Renato on October 16, 2006, 10 a.m. at White Cross, a beautiful little Filipino boy with a bag bigger than him over his shoulder. He was waiting for us half-anxious, half-afraid, curious, very irrepressible in his movements, and we like inexperienced parents ran behind him trying to hold him, the baby whom we were looking for, that we have desired for a long time. And now he was with us.

The moment started a new life for us.

We stayed 20 days in Manila. We remember the rides on the tricycle and the fun Renato had going around the city. We remember the kindness of the Filipino people. We have adopted not only a baby but the whole country.

Sometimes we think about couples for are not so lucky as to have a child of their own. Where we could, we try to encourage others to consider adoption as an option.

Renato has adapted himself very well in our reality, a happy and joyful child who eagerly goes to school every day and who has many friends with whom he shares his love of sports and play. We are proud of Renato and every time we look at him, we feel so lucky to have such a wonderful, clever, sensitive boy.

We are aware that in the future there could be some conflicts and difficulties with him, but it is the parents’ role to listen to their child and treat every crucial situation with respect for the feelings of the child, and with discipline and love.

In the meantime we would like to thank White Cross for what it does for the abandoned children and for what they have done in taking care of our dear Renato.

Our Gift From God
By Andrew and Olivia Longley

On June 26, 2007, we were blessed with a beautiful two-year- old daughter, Arianne Basbas, from the White Cross Orphanage in the Philippines. When we were shown the beautiful photo below and told that she was assigned to us, we shed tears of happiness. Our three-year wait for a daughter was finally realized.

Our first challenge as parents was to learn to communicate with Arianna. We taught her sign language using DVD, and it proved to be an excellent device for the toddler who knew no English. Her favorite signs were for “milk,” “more” and “candy.” Our second challenge as parents was to teach Arianna how to overcome her fear of animals and toys with faces. Within several months, Arianna became comfortable with our pet cats and her toy teddy bears and dolls.

To prepare ourselves for developmental changes, we took positive parenting classes to learn discipline techniques. We read about the growth and expectations of toddlers, researched various preschools and prepared healthier meals.

We came to understand that parenting is a tremendous responsibility that requires making good choices. We also made a conscious effort to be good role models and make sure that she has God in her heart. Ultimately, we’ve made choices that are best for Arianna.

Arianna has adapted very well to her new surroundings. She has transformed into an extremely happy, intelligent and loving child. Arianna is adventurous, active, friendly, sensitive, and creative. She also has an endearing sense of humor.

Arianna celebrated her fifth birthday on August 29. She is well loved by my family and friends. She brings so much happiness to us and anyone she encounters. We are so blessed to be Arianna’s parents and look forward to watching her develop into a wonderful, caring and responsible adult.

As adoptive parents, we encourage others to adopt. The positive foundation created in adopting a waiting child will generate a healing effect in the world. It is one of the greatest contributions to the global society.

You never know what direction life can take you. We were unable to conceive our own child and so it was a gift from God that He led us to the Inter-Country Adoption path to find our son Christian. What a long and winding, and at times, hilly path!

We put our faith in knowing things would be okay. We put our heads down, focused on our lives and kept moving forward until the day we would meet. The photo we had of Christian was a guiding light - a little smiley boy with such life in his eyes, waving hello. We kept it close to us at all times.

The day finally came when we traveled to the Philippines and arrived at White Cross. What a day! There, waiting for us, were the children, caregivers, and a beautiful welcome sign.

In one of the caregivers’ arms was a little sleeping boy. He was placed in my arms. “Here is Christian, your little boy.” He woke up, looked into my eyes and placed his finger on my mouth and then fell asleep on my shoulder. Tears streamed down both my and Craig’s face.

A beautiful ceremony with singing and prayers followed. Christian remained peaceful in my arms. We gave thanks for the wonderful care that Christian had been given. What a special place White Cross is. You could feel the devotion and love given of the children. We felt very fortunate that Christian was a part of this and it was his first home. To have the continued contact we have with Mely and White Cross today is also a true blessing.

Then our journey began as a family in Melbourne, Australia.

Every day, since that first day, has been a discovery. As parents we discovered the responsibility and care, the overwhelming love and tremendous feeling of contentment; Christian’s discoveries of the world; our joy in discovering new things in life to share as a family.

It’s been two-and-a-half years now since that first day. What a lot of feeding, growing, sleeping, playing Christian has experienced over these years.

That smiley little boy we first saw through a photograph is now a vision we wake up to every day. Christian’s sparkle has ignited so much love and life in our hearts and those around him.

Not just a journey, but what a destination!